For the GoFundMe Heroes Campaign, I had the honor of photographing Luis Garcia, a retired paramedic, and firefighter who spent $40K of his own savings on Narcan. While attending and documenting his class, which is free to the public, I learned a lot about this life-saving Nasal spray that can literally bring people back from the dead after an opioid overdose. (I even received my own dose, which I hope to never have to use.)  After Luis’ class, we had the chance to chat some more and make a few portraits of him around Boynton Beach, a South Florida town, just North of Boca Raton, that has seen a huge rise in opioid overdoses in recent years.

Check out Luis’ full story below…

In his 28 years as a firefighter and paramedic, Luis Garcia responded to thousands of 911 calls for people who had overdosed. After he retired, he learned that the FDA approved a nasal spray called Narcan that literally brings people back from the dead minutes after they stop breathing, with no side effects. Luis knew that this was the way to save his community. So he took the $40k that he’d been saving for a new car and went out and bought 800 doses of the nasal spray to hand out for free.

“There is no other drug that literally brings people back from the dead without allergic reaction, addiction potential, overdose potential, or harm if you give it in the wrong scenario. It’s mind-boggling. People are coming back just like Lazarus in the Bible.”

But somehow, no one knew about this miraculous nasal spray. And aside from first responders, no one seemed to have it, even though it’s available over the counter without a prescription across the US. Luis decided to change that.
After Narcan became FDA-approved in January 2017, Luis applied for part of a $65-million grant given to the state of Florida to fund Narcan distribution, public education, and rehabilitation. But for whatever reason, his application was denied.

“When I got the notification I was rejected, it hurt,” says Luis. “At the time, though, I had almost $40k saved up to buy a luxury SUV. My girlfriend made a remark about the value of a human life, and that triggered something in my head. So I went out and used that money to buy 800 doses of Narcan.”
Around the same time, Luis also started a GoFundMe so that he could afford more nasal spray doses, which cost about $50 each. To date, he has raised over $2,400.
And in the summer of 2018, Luis hit the ground running. Over the past five months, he has traveled around Florida on his own dime to host 53 free awareness classes for the public and hand out over 1,000 doses of Narcan. 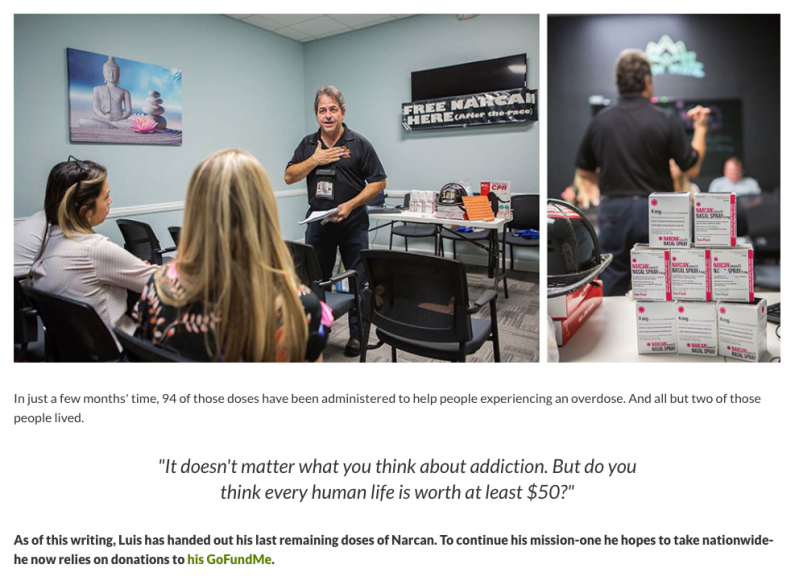 The money he raises will be used to purchase more nasal spray doses that he can hand out for free. Luis also hopes to turn his project into a real nonprofit, which would allow him to buy two-packs of Narcan for just $75.
“I’ve had a couple of nonprofits, churches, and companies help me,” says Luis, “but too often, unless people are affected by the disease of addiction, they just don’t seem to care. And that stigma becomes their excuse not to save people’s lives. But this is a problem that affects all of society. And we have to fix it.” 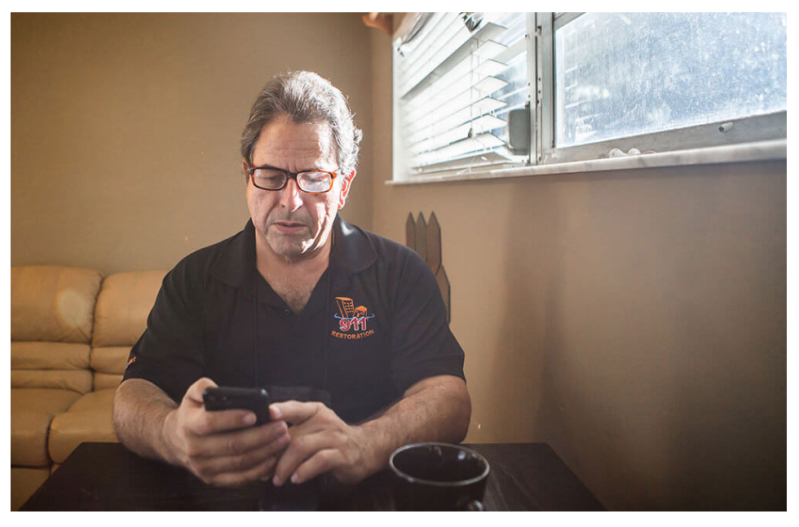 And as Luis waits for more support to come through, you can be sure he won’t sit idly by. He will remain on call, one ear to his police scanner, ready to run to the rescue-without judgment, with respect for every human life.
To support Luis’s mission to save lives, check out his GoFundMe page.