My great-grandmother lived to be nearly 102 years old and she was one of my first portrait photography subjects.  She could recount stories from five generations!  Her stories were fascinating and so was she.

Maybe it’s because of her that I have such an affinity for those that are older and wiser than I.  And it’s no secret that South Florida is a mecca for retirees and seniors seeking year-round sunshine.  So when the marketing manager of Vi Living, a luxury retirement community with numerous locations around the US, approached me to photograph several Vi residents, I was happy to jump on board!

Vi Living has three locations in South Florida-  Vi at Aventura (in Miami), Vi at Bentley Village (in Naples) and Vi at Lakeside Village (in Lantana, not far from West Palm Beach).  This year, on separate occasions, I was lucky enough to make portraits and lifestyle images of residents and staff members at all three.

Here are a few of my favorites….

All of the residents we photographed had such interesting experiences and life stories. For example, after getting married, Mr. & Mrs. Fuchs (pictured at the piano below) combined their musical talents to perform together in a traveling song and dance duet for 25 years. 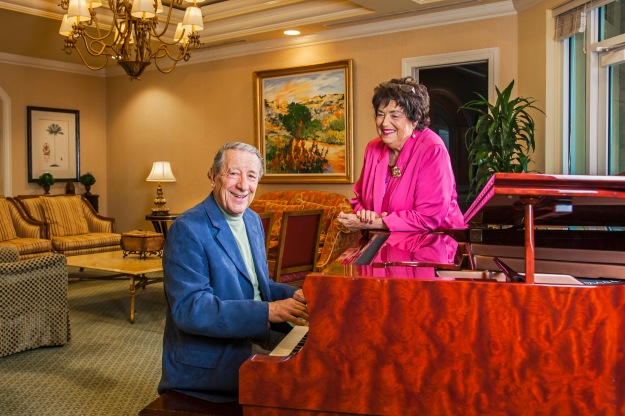 Portrait of musical duo, Mr. & Mrs. Fuchs, are also residents of Vi at Aventura and have been performing together for decades

Avid golfers and newly weds, Mr. Blanchard and Mrs. Cedarblade, photographed at Vi at Bentley Village, in Naples, FL, where they met and fell in love.

Mr. Greenbaum (pictured with his painting below) took up painting only after retirement and has continued on to be a prolific painter, focusing mostly on portraits and scenes from the Southwestern United States. 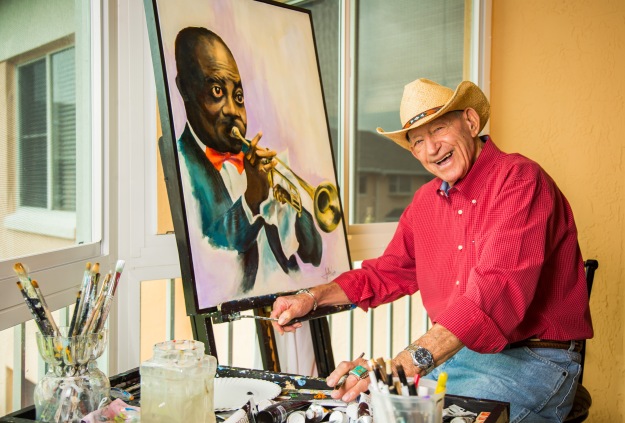 Portrait of Mr. Greenbaum, a resident of Vi at Lakeside Village. His paintings cover the walls of the home he shares with his wife.