At the end of January I drove to Elko, NV to attend and photograph the Cowboy Poetry Gathering.  Before setting out I envisioned the cowboy portraits that I planned to make.  In my mind I saw the cowboys set up against a dramatic landscape made of mountain and sky.
Since I have lived in a warm/temperate climate for a while now, I sometimes forget that other places get really cold this time of year…one of those other places being Elko, NV.  Anyway, being that it was cold in Elko and I have VERY little tolerance for cold ( I’m a major wuss when it comes to weather) I wound up scrapping my original plan to shoot outside and instead photographed the cowboys against a plain black paper backdrop.
While I was satisfied with the portraits on black, I just couldn’t get my original idea out of my mind.  And while I pride myself on my ability to do things ‘in camera’, I decided that this would be a great opportunity for me to brush up on my Photoshop skills.  With that said, I wound up producing the images below, which are composites of the cowboys with landscape images I took earlier this year.  I’m really happy with the outcome (even though they’re composites) and as an added bonus I feel much better at that aspect of Photoshop now.
I plan to work on more of the cowboy photos, as I made over 30 portraits while at the gathering.
As a side note, I chased down the cowboys with the best mustaches/style and the guys below all definitely get a gold star for their awesome cowboyness.  Merlin (top left) not only might be the winner of the ‘best mustache contest’, but also makes and sells his own ropes (featured in the picture below).  Cowboy Poet, Jim Bone, (top right) is practically my neighbor (he lives just East of me in Clayton, CA) where he boards horses and follows his creative pursuits.  Donnie Rae Johnson (bottom left) was an extra on the HBO show ‘Deadwood’ and seemed more than happy to be photographed and Andy Boyer (bottom right) is a bartender at the Western Folklife center, where the gathering was held.  The first time I saw him behind the bar, I knew I needed make his portrait. 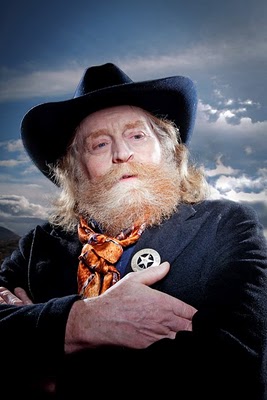